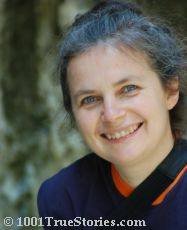 Reading Danah Zohar´s and Ian Marshall´s book Spiritual Intelligence I had a great A-ah. And an equally great A-ha too. I had already known all along that the IQ, EQ and the other multiple intelligences I had read about were not quite enough. While enjoying (and suffering from) an actually high IQ, I felt that I was also good at something being connected rather with the soul but still different of the Emotional Quotient EQ. The EQ, I knew it without having ever measured it, was clearly not one of my strengths.

I knew also that the other intelligences - the musical, the social, the visual-spatial and all the rest - were not describing that special thing that I knew I had some kind of mastery upon. It was however at work in my ability (which now I know it´s to be subscribed to the Spiritual Intelligence)...

I must have driven crazy my parents as I was a child. I am almost 47 by now and I still want to know the WHY and HOW of everything. Not like Why and How did Anna move away, but like

This kind of WHY´s and HOW´s were why it was fine for me studying Physics. My heart would have liked to study Psychology, or Literature, or Arts, but Physics is great too. I´ve even graduated with a grade higher than 9, out of 10.

Surely you´ve noticed the diversity of experiences (coming from a basic interest in human nature and general knowledge), and, maybe, the lack of prizes. I did win some during my studies, in Maths, Literature, Physics, French, Photography or Gym. But growing old I started to increasingly dislike this kind of competitions. I now have a word to say about this...