Articles in this category:

"Why should I care about the collective Spiritual Intelligence?"

Exactly. Here is the problem. We don´t care much further than our own reach radius of an arm length. And we forget (if we ever think about it) that the collective Spiritual Intelligence is more or less the sum of our own spiritual intelligences. That there is an influence in both directions. That we have our share, larger or smaller, in the collective flaws plaguing a community.

We forget that WE DO INFLUENCE ONE ANOTHER even if we don´t do anything.

Boy, I´d like to write once a story about these influences! Like somebody who loves something in Japan, and how that may affect lives in Romania!

(Do you think it´s exaggerated? My first thought here is about the Japanese running a restaurant in Tokyo specialized in garlic. He loves garlic dearly, so he had gathered recipes from all over the world. Now, if a Romanian reads this, don´t you think the idea is very much feasible... especially in the whereabouts where tourists visit the Dracula Castle?! How many lives do you think that would affect? His own, his co-workers, some lives of people getting acquainted in his restaurant, the lives of those who like this idea and open a garlic restaurant in Ohio... and so on!) 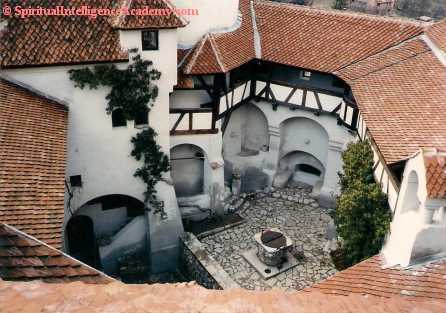 The Dracula Castle in Bran, Romania. The real Dracula, the who inspiring the story (which by the way has almost nothing to do with the Romanian traditions) was only 2 weeks there. In prison. But it´s an architecture jewel worth a visit!

However it is not this kind of influences which interest me mostly here, but about how we influence the others knowingly or not knowingly through our way of thinking. (How a smile can have literally an influence over a lifetime. Or a touch. The way we dress. I´ll finish writing all the articles under these links as soon as I can, and then you´ll see what I mean.)

I mean, we influence X and X influences us back. An example shows that best. Because the eyes "are eating too", as the Germans say, that is, we buy what appeals not only our stomach but also our eyes, the groceries offer us big round apples, worth to feature in any Snow White film (and almost succeeding in being as poisonous as that one). Soon we see only big (actually huge) round apples everywhere and we don´t even look at their stepsisters, the little, natural apples half the size and with some flaws on them (if they appear at all somewhere). We look at them as some sort of trash and don´t even get to taste them. Because if we did, we´d feel like a little explosion of GREAT taste under our soft palate... 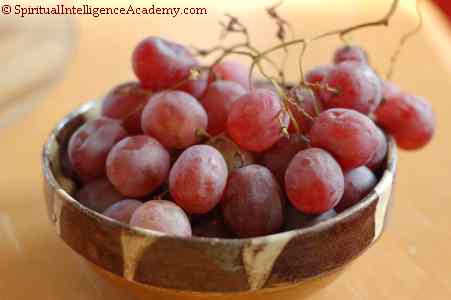 Iron man, err... grapes. Undestructible. I have photographed them on February 1st. They have been in our fridge since the 3rd week of October last year.

I´ll take a picture of them every month or so, and let you know how they are doing. (Here you can read an article dedicated to them.)

... My whole respect for nowadays chemistry and its marvels... Not even mildew doesn´t touch it!

Our preference for big apples made the groceries offer only such... objects (I meant to say fruits, but they are not really) and make us slowly forget what real apples are. I know what I am talking about. The apple I point at are no different from the grapes above.)

... If we developed an awareness about what is good and what only looks like good on the market, soon there would be no Snow White apples on the market!

This is a very simple sample of the collective spiritual intelligence pattern of reciprocal influence I was talking about! It applies in so many other fields of life, that I only can hope I have enough time to write a quarter as much as I wanted to (and could) about them!