The first story is actually an experiment proving there is such a thing like Collective Unconscious. It was lead many years ago.

It is a wonderful coincidence, nay synchronicity, that the next day I decided to write this article in order to put it at the foundation of this site, I received an e-mail containing an answer I had personally looked for since I have first read about...

... and some other useful details!

The story as I knew it was that some Japanese scientists were working on an island with a colony of monkeys. They have once noticed that a monkey picked from the sand the sweet potatoes the scientists were feeding to the colony, and washed them in a nearby river. Great, no more squealing in the teeths – soon all the monkeys started to wash the sand off this way. 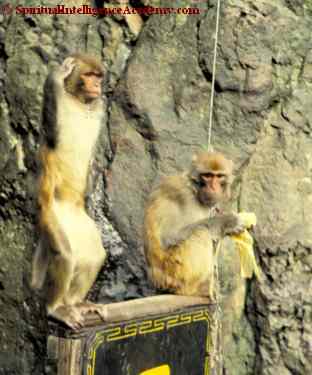 Then the scientists noticed that also monkeys in other colonies on that island suddenly started to wash their dirty food in the ocean, even if they hadn’t met the ones under observation. Soon all the monkeys on the island were washing their food that way.

But the biggest surprise was yet to come.

Reports from another nearby island had it that by now also the monkeys there were doing the same thing! The lack of contact between the monkey on the two islands was now obvious, still, they had somehow bridged the gap and did communicate.

It seemed that after having reached a certain "critical mass" of monkeys doing this, the "signal" was strong enough to be caught by (and to influence) the monkeys over the ocean´s gap. The "critical mass of thoughts” about the potatoes washing became part of some sort of a common knowledge of all the monkeys there. 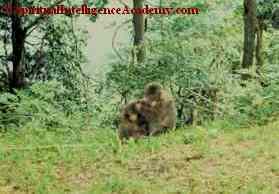 ...As I said at the beginning of this article: I have looked for more details about this experiment several times, with no result. And within 24 hours after I had decided to write about it here, I got the details by the said e-mail:

The island was Koshima, the monkeys were the species Macaca Fuscata, these experiments took place starting in 1952 and it seems there were fruits instead of the sweet potatoes. The monkey who had the idea to wash the fruits was a female caled Imo, 18 months old, and it took abot 6 years until all the young monkeys from that colony learned it. And only a few adults overtook the habit.

And then not only the monkeys in the other island, but even on the continent started "from the blue" to wash their food...

Jung coined this term of Collective Unconscious to explain things one cannot otherwise explain. For example he had noticed that some Eskimos dream about spiders or snakes. Even if these animals don’t exist in the arctic cold! Those Eskimos had also no previous contact whatsoever with these animals and they themselves didn’t know what they were dreaming. But by drawing it, anybody could recognize the animals

It seemed the Eskimos had intercepted thoughts from other latitudes engraved in the Collective Unconscious.

We, my husband and me, have also some true stories to tell about this: at least on conscious experience of a connection to the Collective Unconscious :) .

We were strolling in Nepal´s capital city Kathmandu in a park heading to the river, when we suddenly felt a smell. It was a disgusting one, I felt a strong urge to vomit.

It is as if all the thoughts we humans ever had are stored somewhere. And both our experience in Nepal, and the snakes and spider dreams of Eskimos, show that we can access that huge data bank.

As if... Recently quantum Physics has a name for this „somewhere”: it is called the Zero Point Field. I’ll write some time an article about this.

Another experience of us involves not human but dog´s collective unconscious.

A plague for many Romanian cities are the stray dogs. Well, in our journeys through Romania we have noticed that a few dogs in the city of Iasi were crossing the street on the zebra. Next visit to Iasi we saw it again, and, amused, we talked about this to our friends there. They said very naturally Yes, of course, all dogs in Iasi cross the street by the zebra!

It was a surprise for me some years later, when we noticed in a town about 300 km from Iasi that... some dogs were walking along the street until they reached the zebra... and then crossed the street!