To Be or Not to Be

Home > Spiritual Intelligence - Stories > To Be or Not to Be

The Curse of Our Times

Looks like wood, it’s ceramic paving tile.
(This, at least, is innovative.)

Illustration for To Be or Not to Be: 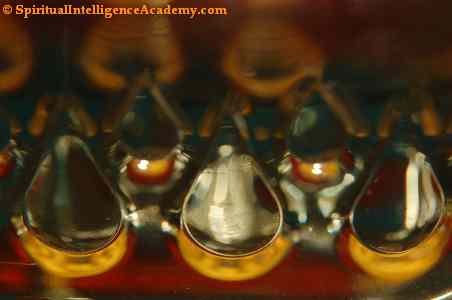 Looks like milk, it’s only white and liquid.
(Our genuine Romanian shepherd dog, his parents still fighting off bears and wolves somewhere in the Transylvania's mountains, doesn’t drink it.)

Looks like chicken soup, 10 minutes before it was still a little square. (A cube, more exactly, called “Chicken soup” because of the picture, I guess.)
Looks like food, it’s a bunch of E’s, with some tongue-twister ingredients taking care of the volume, and being themselves the result of some genetic experiments. As for flavor - it's made by Henkel.
Looks like butter, it’s only margarine.
I.e. also plastic. One molecule away from your toilet seat.

Looks like smoked cheese, it’s only cheese with smoke flavor coming from some can.
Looks like old French red wine held for ages in old handmade oak barrels. It’s only ordinary wine kept less than a year with shavings in bags similar with the tea bags.
Or wine powder and water instead of ordinary wine.

They look like Elvis, it’s a whole bunch of people in an Elvis contest.
No more Elvises are born. No more feelings to embody. Really, beautiful, genuine feelings are dead.

Looks like wealth, it’s a mere Rolex on the hand. Nothing further.

Looks like medicine, it’s a slow poison for the rest of your body.

Illustration for To Be or Not to Be: Looks like a cow head, it´s an egg-plant. 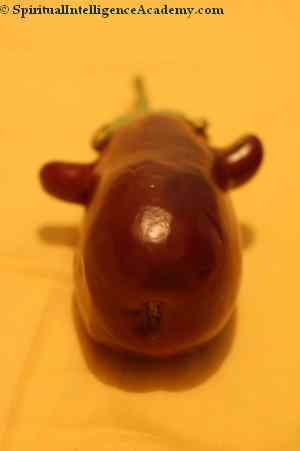 Rings like an old-fashioned phone, it’s only a cell phone.
The sounds is simply recorded. No device really produces it. Our civilization only copies the surface. What's beneath doesn't matter anymore.

That’s actually us. We don’t produce anymore. We only copy the image. Copy and paste, add some value (from a list of values copied as well), sell. Or cut and paste, sell.

Looks like commerce, it´s accepted theft.
And surely some kind of exploitation at the other end.

Looks like professionalism and courtesy. It’s fear to loose customers.
Looks like knowledge, it’s Google, “copy and paste”.
Looks like expertise, it’s compilation without giving the credits.
Looks like help, it’s a veiled showing-off of one’s own power or (fake) benevolence.
Looks like „sorry” it’s „actually it’s your fault, but I still need you”.
Looks like a game, it is the wish to be better than your competitor. Not to be better. But to be better AND win at any price.
Looks like a grade A, it’s an educational system gone awry, avoiding hurting the self esteem of a child by labeling „hunny” or 2+2=5 as creativity.
Or maybe it’s the teacher pleasing the parent of the child, high executive she might need. Or it’s the fear of the school principal, the father of the child.

Illustration for To Be or Not to Be:

Looks like a burst, it´s cocktail straws against light (Explanatory photo to be added in about two days) 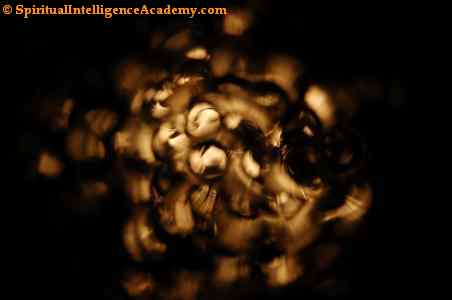 It looks like love, it’s only sex. Without love.
It looks like smile, it’s payed.
Happiness is only in commercials. 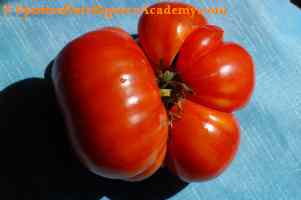 Illustration for To Be or Not to Be

These here don´t look like tomatoes. THESE are the real tomatoes!

... And NOT the ping-pong balls (also tasting like them) in the supermarkets... If you only could also feel their taste!!!! They grow in our garden (and I guess in many gardens of Romania), the large one is the size of two fists and it doesn´t take anything else than sun, unspoiled soil and water. And its time: natural, un-hastened growing. 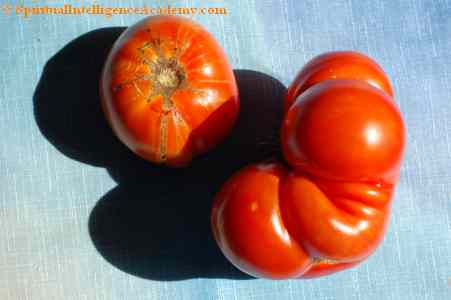 Thanks God I live in Romania...

... It looks only almost like a tomato but its taste bursts in your mouth. As if the taste of all the tomatoes in a Western city had exploded.

And this means baby-sitter, soul's shrink, bank, sister, brother, even parents if you don´t have them - all in one: your friend.


Law/s of Life at Work Here:

Unfortunately there is no Law of Life at work in all this. Our civilized life is infringing the Law of As Within, So Without. I wonder when this tension will bring the Western world to some sort of collapse...

The difference between what´s out and what´s within - is a possible definition of LIE.

(Try the appendix with the few less society critical thoughts!)