This article is about our Grapes' Anniversary. They celebrate a long life: at the point I started to write this article, 5 months in our fridge, without any trick. (In two weeks it will be 6 months.) And they are doing well, thank you!

This "Grapes' Anniversary" expression is a paraphrase of the "Salad Anniversary" by Machi Tawara, a classic poems (tanka) book making furors in Japan. I´ll write once an article about a poem in it.

My daughter had bought these grapes made ("manufactured" would be better) in Italy from a little shop coming from school. It was October 2013, soon after its middle or so. I fancied eating them, even if I do my best to eat, where applicable, food made here in Romania, and even if somehow they looked unhealthily perfect. As if having been drawn in 3D.

I did take some berries but I regret every single one after the first one. They were tasteless, and in some unspeakable way they felt unpleasant.

Unhealthy food 1: "iron" grapes from Italy after more than 3 months in the fridge. They have not even dried off the water - like plastic bags. I mean - berries! 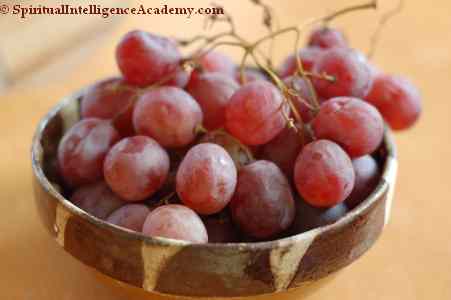 My daughter had the idea to cut them in small pieces and feed them to Dad, when he came home. Her question was What are you eating now, Daddy?

Dad is a gourmet. He loves fine food and his feeling for tastes is better then mine, a normal mortal. His answer?

He only felt it had the consistency of some fruit, and that was all he could tell.

That happened, as I said, almost 6 months ago. I then forgot about them. I left them in the fridge, unable to throw them away as they looked beautiful, unable to eat them or put them on the table to be eaten, as they tasted - well, not awfully, but they tasted not :) .

After some time I have re-discovered them in the fridge. They looked as fresh as some weeks before. Now I became curious.

Unhealthy food 2: "Iron" grapes, about 4 months in the fridge. Well, some molecules of water did escape from inside them. 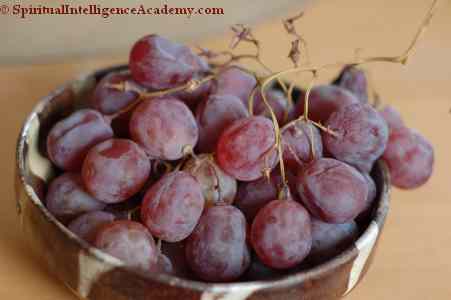 Those grapes are still in the fridge now, April 5th, 2014. They are not anymore so beautiful as almost 6 months before. (The last photo I took of them follows, the one saying "After almost 6 months".)

I am really proud of mankind´s chemical industry. They manage to make even food.

... We used to live in Austria for quite a while. They are very proud of their organic food. Still, since the time they have started producing and selling it on a large scale, 1994-1995, I have almost never found, among all those organic products, vegetables and fruits as full of taste and flavor as I know it from my childhood in my good old Romania and I partly still find it nowadays.

Unhealthy food 3: the very same grapes from Italy, after almost 6 moths in the fridge. Still counting, keep in touch! 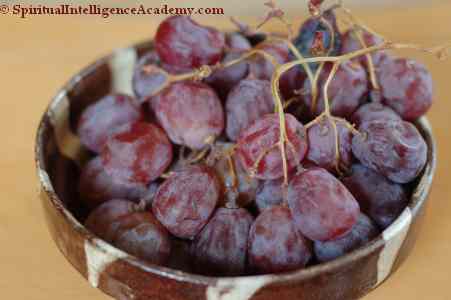 We have now un-emigrated for a while, and are living again in our home country. At the beginning of our re-location to Romania I used to ride, with my bicycle, past marketplace. In the Romanian marketplaces the farmers and merchants bring their products to sell. (On this page a photo of a market place; it´s the last picture down the page.) My road was running near the market – and I still have in my nose how the wonderful smell of their honey melons, exposed 10 meter away from me, cherished it!

Their counterparts that we used to buy while living in Austria, and kept on finding in any other western country (Japan included albeit for us it´s in the East), had almost always no smell. Even if we bumped our nose into them! While here in Romania I often feel, solely by smelling, the strawberries or peaches or even apricots being sold on the table behind me... And I (I guess almost any Romanian) always can tell by taking a fruit or vegetable in the hand and smelling it, whether it´s Romanian or imported. I use to say about tomatoes (and almost anything else) that their taste explodes in the mouth!!

What Can We Do about All This Unhealthy Food We Have?

First of all, I hope it´s obvious that this food is unhealthy. Some almost-plastic tarnished as food CAN´T be edible. We can´t feed our body cells plastic and expect them to simply digest them without any protest.

My husband saw a documentary in Germany about a graveyard where they have discovered that recent bodies didn´t decompose. The accumulated food preservatives prevented not only the respective food from going bad...

You´ll say, what if that´s all we can find? we are in hurry, we want grapes on our table, we must get them and hurry home!

We CAN! do something. The logic is simple. If we buy it, they will keep on producing it.

If we stop buying their chemical food, they will stop producing it.

The time we gain today by buying unhealthy food we (or even worse, our kids) will lose tomorrow by physician - with no more control over our health. Your call.

Law/s of Life at Work Here:

Everything in order to exist is built upon a basic information. Information is the heart of anything.

Strong enough information gets a clothing of energy. Enough appropriate energy is clad in matter. It is as if an energy matrix is filled with matter. Very much like building a house: we first get the idea, than the plans (these are the information), we start putting our efforts and money into it (that is energy, money is energy too, look here!) and eventually on this information we put some matter. And there you are, our new house!

If those grapes are born out of a negative intention, i.e. increase the profit even at the cost of consumers' health, the result can´t be positive.

A beautiful application of this law is a principle I like very much: think global, act local. Encourage others about buying organic food, spread word about eating organic. The more we are, the better world we are building in the future.


Giving up our short-term convenience by purchasing the unhealthy food we all know is packed with a whole chemistry book, and buying organic food instead, only organic food, is the first step. It is more expensive, but it´s normal, since the organic farmers have much more loss than usual ones. And the price is also well worth it! The food we are buying now is bound to bring us health problems. It spells

It´s an investment, not an expenditure! Buying not from the supermarket but directly from organic producers is even better, because it slowly forces the supermarkets to buy from locals.

... Not far away from our city there is a huge apple farm - the "capital city" of apples in Romania, I guess. Why the heck do local super- and hypermarkets bring us apples from e.g. Poland?! (It´s a rhetorical question, we all know why...)