Why We’re Singles: Our Society of Lonely People

This article describes how the analytic approach, which means

... lead ultimately to the

As above, so below. As within, so without.

It all started in ancient Greece. They are those who started our culture of logic. Of objectiveness. That has, as a first side effect, the ignoring of the feelings.

Because this approach was so successful in producing immediate, visible results, and in explaining the world around – thus allowing an increasing control over it –, it became more and more successful. And accepted.  It became that much accepted, that during Renaissance a turning point came and a big shift occurred: man was shifted in the middle of the Universe.

And since then all went downhill in what our feelings concern. It´s then, in that time, when our loneliness started to grow.

Man replaced there, in the middle of the Universe, nobody else than God. Before Renaissance everything revolved around God. "Would God be pleased by this or that." "What to do not to awake God’s wrath." "How can we live so that we comply with His laws."

I remember very well the moment when I read this in my history book when I was 13. And I wondered, whom or what did man replace by this shift into the middle of the Universe? In the communist Romania God was a persona non grata. His name was not even mentioned.

After Renaissance the main emphasis was set on humans. On their needs. On what to do to fulfill those needs as good (best!) as it gets.

This analytic way of thinking – find and fulfill man’s needs– eventually and inevitably lead to the question which now prevails: What do I have from this? (I am sorry English has this I already in caps....)

Look around, look into yourself, „inself”if I may say so. When have you done something for the sheer sake of somebody else? Something that you had ABSOLUTELY no use from? Not even the hidden thought „The person I am helping or the one seeing me doing this, will think I am nice”?

I don’t say people before Renaissance were doing good things for the others without feeling great for that. I only say that, while having God in the middle of one´s Universe, one is more inclined toward doing something good for the sheer satisfaction of having done the right thing. And that this way of thinking is much more spread in a religious society than in our Western one.

I could go here into more details about how we, as a society, are not anymore people thinking also at a meta level, a level higher than oneself and our immediate needs. (We only start to come back to that, pressed by the effects of our mistakes.)  I also can write much more about how this analytic way of thinking took the man out of his sphere by caring about his needs only and ignoring the rest. (That’s fine too, but this way of thinking ignored that besides that person there are some other too, needing to be taken care about!)

I am only interested here about Why we’re alone, so I switch back to that.

A marriage means "together on a path". Two different entities toward a common goal. Each one with their needs, values, touchiness, ways of thinking. But, if educated by this „What do I have from...”, each of them then expects to be at the receiving end - if possible without giving anything. No wonder that so many marriages end into divorce. Each of the partners is computing very exactly what is she or he giving, and expects a manyfold of that back. Nothing is just given, for the sheer joy of having done something for the joy of the other. God beware of sacrificing something for the other! 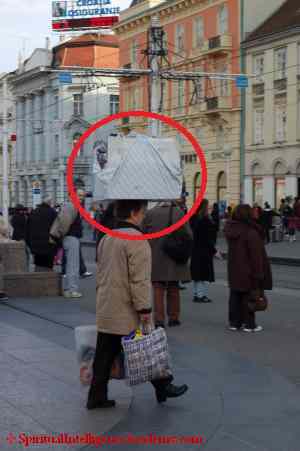 I ask you to ask yourself in all honesty, how many of you could be the woman in this photo?

You´ll start talking along the line of Being Stupid or Why doesn´t she take a taxi. It doesn´t matter WHY she does this. It does matter that this woman has a capacity of endurance and sacrifice not many people nowadays have. But which are absolutely needed when embarking with somebody else in a same boat...

P.S. The picture is taken in Europe. Incidentally it is not Romania, but it cold have been. Actually it could have been from any Eastern European city!

Not even that common goal is not anymore common! Now a marriage means two beings geographically together, each pursuing their own goals - goals meant to fulfill one´s need of being valuable. The motto for each of them is "My needs are more important than yours".

No wonder, if both partners see it that way, that divorce is from the very beginning taken into account. The partners never really "melt". They keep their own personality and identity. How many of you have the same bank account with your husband / wife? I was aghast when I first heard that that is possible!! Now I understand it: everybody knows that everybody is thinking in these terms. Hence trust also has disappeared.

... But it´s still weird, this separate bank accounts. How can you go through Thick and thin with somebody in these conditions? Because there is life also after the honey moon... A different one!

Traditional, Arranged Marriages vs. Western-type Marriages Based on Love

Surprising result in Japan, some time in the '90s: statistics show that traditional, arranged marriages are more stable then the Western-type  marriages out of love.

Of course they are. Because people going into an arranged marriage are more traditional inclined than the modern ones, who had taken this „fashion” from the Westerners.

Don’t take me wrong. I don’t advocate arranged marraige. But I do advocate an education setting more focus on giving, on the needs of the other, on making compromises, on learning to „cut the own will”. On finding more ways of educating a soul so that it won’t end in the question "What do I have from this?", but in How can I integrate / help / be useful...?"

Tradition oriented people are much more inclined toward what tradition teaches them: toward the other, toward „together” rather then „me vs. the rest”, toward giving rather than taking, toward finding the middle way. The idea is "He who gives, gives to God".

But God belongs not anymore to the Western society. (When have you seen a priest or a church treated in a fully positive way in a magazine, on TV or in any other media?) It does belong to the Eastern ones, I am happy each time when they pop up in Romanian media. But I also see the buds of the attempt to secularize the society with the same methods I have noticed during my 16 years emigrated in Austria. (I´ll write once about this...)

Law/s of Life at Work Here:

What is born out of a cat, will eat mice.

Actually this is a Romanian proverb, but even translated word by word preserves its meaning:

The nature of the original information propagates through all the effects of the issue born of that information. That happens until an information with a greater energy influences the process.

That means, everything started with a bad intention will have negative effects, unless a greater energy of a positive nature interferes.

Applied to this article: the original information of analytic, separative way of thinking, ultimately lead to our separated-ness as humans. To our loneliness.


GENUINELY LOVING, GIVING PEOPLE ARE NEVER ALONE, unless they want to!

Giving and Loving are qualities able to be trained. The method is simple. First pretend to. Give as much as you can make it still with joy, act as if you loved. Then you´ll slowly find genuine joy into giving, and will actually be loving! It´s not the easy, short path, it does take effort. But it´s the most sure one!