About Chakras' Mechanism - How Do Chakras Work

Dr. Candace Pert, RIP, discovered in the '70s that our brain (more exactly the hypothalamus) is in charge for a special production. Namely, each of our emotions makes this gland release in our body a specific (emotion-specific) neuro-peptide.

Don´t know what a neuropeptide is? Me neither, to say the whole truth. For me as a Physicist, not a Physician, it was more than enough to know that the carriers between emotions and the cells of our bodies bear this name. As for me, they could have been called also rtmpxes. ("Romeo and Julia was written by Shakespeare, or by somebody else with the same name...")

But for the sake of this article I have checked it. They are some not quite-proteins responsible for the communication between neurons. I.e. between the cell making us feel at all something. 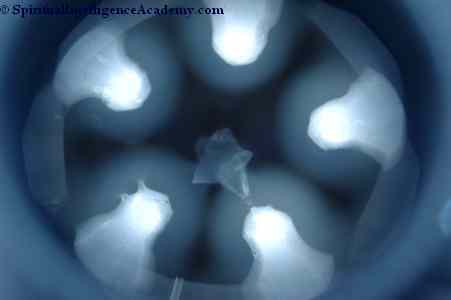 Aging and Diseases Are Both about Chakras


So each emotion has its specific neuropeptide released in the body. Now, then, these peptides, after being released, spread in the body and reach the surface of the cells. They knock on their "doors". The doors to the cell are actually some "ports", some kind of locks where the specific peptide enters.

And here´s the clue: anger´s peptide is quite different of that of, say, happiness´ peptide. At that, different cells in the body are sensible to different peptides. For example if we are very often angry, our cells will be very often stuffed with anger-peptides. That means that "ports" of entrance in those cells sensible to them are busy most of the time. Because of those busy "ports", the cells won´t be properly fed by nutrients because they are entering also through the same ports. That´s why, in time, the cell degenerates.

That means for us, on the macro scale, disease or aging. It´s that simple: our body cells (making up the organs) are literally too busy with handling our feelings, so that they can't intake food or oxygen.

For an animated explanation about this mechanism try this  film, What the -Bleep- Do We Know, from minute 52:15 on, but especially starting from min. 55:40. (From 59.42 you may see and hear Dr. Candace Pert herself. And I actually recommend full-heartedly the whole film!)

If you are not familiar with chakras, now it´s time to go to this article about chakras and read a bit about them. And after that you´ll see that the discovery of Dr. Candace Pert is the scientific explanation of the chakras' mechanism of the Oriental medical school.

About Chakras, Aura and Electrography

You  might be interested about the technique used for taking the chakras photo in the article mentioned above. It is not an ordinary photo, as you may have noticed. In Physics it is called electrography. I have a little story about this, but first I am delighted to tell you the esoteric name of it: Kirlian photography. Yes, Kirlian photography of the aura and electrography are one and the same thing.

I must however say also that it´s the first time I saw an electrography including the chakras.

... And the mentioned little story about electrography

Before graduating Physics at the University of Timisoara, we had to write a dissertation paper. A fellow student of mine had an impossible topic: exactly this electrography. Considering the fact that we were still in the Communist era, where all things esoteric were strictly banned, she couldn´t get any kind of bibliography. (She had to ask for changing the topic and had hence a much shorter time to write her dissertation.)

If you know naught of chakras so far, or only enough to disdain them, Dr. Pert´s work will change your perception. Not only about chakras, but also about life and its events. About health and whether the affirmation "Diseases come as a pure random, I can´t do anything about them" is true or not. About whether it is worth to get angry at staying in a traffic jam. And why everybody recommends laughing and taking it easy.

It won´t change your perception if you are a hard-core materialist. I´ve read once a comment from such a person. It reminded me of our Romanian saying "There is no blind man blinder than the one who does not want to see"...

We also have several stories about healing through this chakra knowledge applied to ourselves. The most extreme happened to our son. This chakras healing saved an operation and the normal growth and probably also the life of our son - you may read this our story here.