What Is a Chakra?

(Home > Physics, Esoteric, Religion > What Is a Chakra?)

You’ve landed here very much likely because you´ve asked yourself and then good ol’ internet What is a chakra.

Chakras are the bridge between our soul and body

In short: Chakras are the missing link between the two often conflicting parts of ourselves: our bodies and our souls.

In longer: read this article.

In very long: read Dr. Candace Pert´s book "Molecules of Emotion". She describes there her life revolving around her discovery, in the '70s, of the mechanism which makes us ill because of emotions we keep on having on a regular basis.

This mechanism is described in short in a separate article (link follows also at the end of this one).

She has been proposed for the Nobel Prize for that discovery. She haven´t got it with good reason: she would have had then the death of the Pharma industry on her conscience... I´ll write about that some other time. (By the way, I was baffled learning that the pharmaceutic industry overhauled the oil and arms industry worldwide...)

So, back to the question What is a chakra.

Basically the chakras are formations of energy situated on specific parts on our body. The main ones are seven and are aligned along the middle axis of our body. Those very few persons being able to see them say they are like a burst of light similar with a flower having a different number of petals, and usually revolving around their middle. 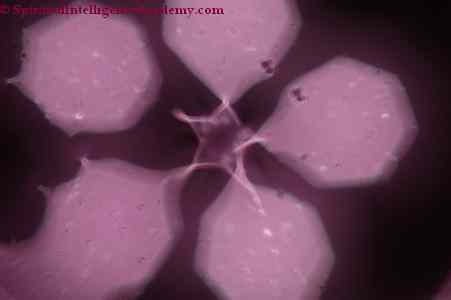 In this article it´s more of interest what they do and hence won´t go into minute details about how they look like and where they are. Here a photo instead, taken by Romanian scientist Univ. Prof. Dr. Cornelia Guja, chief of an Anthropology Laboratory inside the Romanian Academy. Beware, it´s a photography of the reality, not a hand-made illustration made according to the imagination of the artist!

The spots of lights show the places of the chakras on the front part of the body. They have their counterpart on the backside of the body, except for the first and the 7th chakra, i.e. the lowest and the highest one (s. below in the chakra's overview). The person being photographed has not all of them properly working, or their energy is very low. Actually, if you are knowledgeable, you can read from this photo the pretty exact state of health of this person!

The Oriental medicine is based upon chakras and the flow of energy between them and on special, non-material paths called meridians. Acupuncture, maybe the most famous oriental therapy, has been around for some thousands of years and have cured millions and millions of people...

The main task of chakras is to bridge the lap between body and soul. That is, they translate our emotions from our soul toward our bodies. More exactly, if we have often a specific negative emotion, some parts of our bodies will react by getting ill.

It is long known even in the Western medicine that, for example, asthma patients have usually difficulties with expressing their feelings. And everybody knows that anger causes stomach aches!

This is the reason of diseases migration that modern physicians know all too good. They cure somebody and send her home from the hospital with a repaired liver - only to have her back in half an year with problems of the pancreas. All the swallowed medicine has only "repaired" the hardware, the liver itself. The negative feelings (energy!) are however still there, and they make ill another organ.

I have checked this mechanism several times. The most dramatic one is a personal story about our son. We still have him because we could find and turn off the tap of some negative behaviors in us, their parents. We are much more interwoven than we´d like to accept...

Oh. I do know personally somebody able to see chakras naturally. I am aware that this is not much of an information for you, since it could be lie. But I say my truth, do with it what you want.) And a friend of mine knows a special little girl - you might be interested to read this short story about her, and about chakras.

What Is a Chakra - Chakras Overview

1st chakra We sit on it while on a chair. It is the one related to emotions regarding the physical world around us, including money and relatives.

2nd chakra. Below your navel. The chakra connected to sexuality, friendship, creation and creativity (That´s why so many artists have also sex-related issues: a too active 2nd chakra)

3rd chakra. Around the solar plexus. Authority, power. The one deciding for example (if working improperly), whether our fat settles itself as a soft or hard belly fat.

4th chakra. Love. Situated at the level of the heart, but on the middle axis of the body.

5th chakra. Communication. At the base of the throat.

7th chakra. Spiritual Intelligence. Connection with the Divinity. At the top of the head, namely that part that has consolidated as the last one on the head as we were little children, called the fontanelle.