Examples of Laws of Science in Everyday Life (1)

The Laws of Science are actually universal laws. They apply in any area, be it Physics, Astronomy, our soul or your kitchen. Exactly the way we basically all have two eyes, one nose and one mouth, but we look so different, the laws of science are the same in all fields, but they take their "hue".

... Everything is based on a few great universal laws manifesting themselves everywhere. Goethe (Maxims and Reflexions from Wilhelm Meisters Wanderjahren)

It is fascinating for me, as a Physics teacher, to see how science principles and laws are to be found everywhere, as expressions of the same underlying energies. I am looking forward to share them with you.

One first example is the Newtonian Law of Motion. Don´t back away, it has a simple form: Any action gives birth to an opposite reaction. 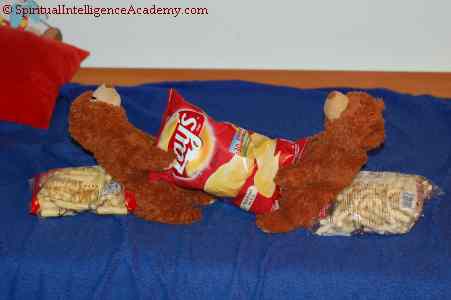 (If we want to make it more academically, we may want to say: if a body exerts a force upon a second body, this second body exerts onto this first body a force which equals the magnitude and acts in the opposite direction to that of the first body.)

Now, we know this already from our everyday life as a proverb! We reap what we sow. Or, What you give is what you get (this is also a Romanian proverb). Or, If you do good, good will come back to you. Germans say The way you shout into the forest is the way it echoes back.

You see it´s one and the same thing? It covers the same reality! Physics expresses this principle in its language. We express it in ours. Exactly the way the words water, Wasser, aqua, apa, eau, cover the same thing in different places.

One more short example about Physics and life. A water surface which is perfectly even and calm reflects a perfect image of the surroundings. That is, without distorting it / them. External influence like wind or other movements don´t affect its mirroring capacity.

Is it different with us people? A person which is perfectly calm, and not disturbed by external influences (be it from the childhood or from now), may reflect the reality perfectly objective, without distorting it. You see it´s the same "mechanism", the same law or principle at work?

An outside influence distorts the capacity of exact rendering of the reality.

Both in lake surfaces and in men´s minds.

You got the idea. One more and very short example - inertia prevents a stone (or ourselves) from starting to move, inertia makes us (or the stone) difficult to stop once we have started. The bigger the stone (and our age), the more difficult to start (or stop) doing something.

I have many more examples. There is one about balance in life and the Geometry´s law about 3 points and a plane I think you´ll love. I definitely do, and often speak to my students about it. It will be the next to write about, not now. See you!