Home > Everything Is Energy > Energy Conversions between Money, Fame and Other Forms of Energy in Our Lives

Energy Conversions between Money, Fame and Other Forms of Energy in Our Lives

The question is actually not What is energy?, but What is NOT energy? Because everything around is a form of it. Which leads to fascinating implications about the interactions of these forms making up our lives.

This article here is maybe a bit "technical" and is meant only as an extension and explication for the statement here that "it is one of the physical properties of energy that its various forms can be converted from one into the other". This statement lays the foundation for a future article about the connections of different forms of energy in our life. And for the idea that we can convert the energy of thoughts into health, for example. This article here explains the energy converters.

The physical definition was "Energy is a potential which yields changes”. And "Energy describes the capacity of an object to do work". Don’t think this object as being necessarily material! Fields and electromagnetic waves are not material but do let TV sets work!

And now think of this definition by stretching its limits. (Physics doesn’t care about who! is doing the work.) If a thought causes me (or a computer character, as discussed here) or somebody else work, that means that thought has energy!

On the other hand, matter, as discussed here, is itself a form of energy. Physicists say it’s energy vibrating with very low frequencies. And yes, the energy stored in matter can make changes in its environment, and the subtle energy it gets from our thoughts, giving matter a value, can cause us work for it. Take a short break and see what I mean. (Among others I have just introduced you the subtle and the physical energy, which I´ll discuss later.)

Classical energy includes thermal (heat´s) energy, electromagnetic energy, kinetic (movement’s) energy, potential energy (the one which causes a falling object to hurt us), nuclear, chemical energy and so on. 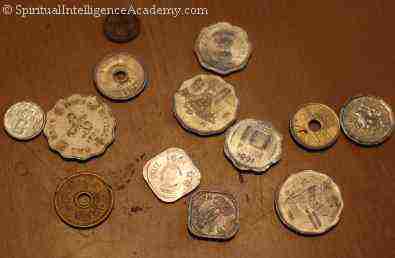 But if you think the definition out of the scientific world, money is also a form of energy! It causes us work... not only in the physical meaning of the word „work”, but also literally! Actually money was, originally, an „energy converter” converting different forms of energy / matter into each other (see below). But it was so a good converter, that strong, that people started to credit it and invest it with energy by its own.

Thoughts are also a form of energy. I showed in the article about thoughts and emotions that they are energy too. Love, attention, joy are all forms of energy, they can all produce changes around and have people work because of them. And in a next article I’ll speak about the energy field of the thoughts.

As I said, money was originally an energy converter. It can convert the energy (effort) to win money into the materialized energy of a house. Money actually can convert almost anything from our world into anything. (Well, it’s a bad converter for the energy of love, but some people still don’t believe it.) Because of this power, people give to money a psychological value it basically doesn’t have. Money is simply an energy converter. But because it´s such a good one, people want it.

Converters between the above forms of energy? Here just a few examples, you can think by yourself about others: fame to money: commercials or a product line made by that VIP’s. Money to fame: Paris Hilton. High status to fame – Steve Jobbs, fame to high status – Arnold Schwarzenegger. Knowledge to money – "Who wants to be a millionaire?", money to knowledge – University.

In short: if we achieve some large amount of a form of energy, we can transform it to another form, if desired and if we find the proper energy converter.

Energy can also be lost. There are transformations which mean spending energy in an un-effective way. The heat developed by the car breaks cannot be recuperated, nor can be recuperated the energy of the sound of its squealing wheels. In the same way, our daily effort can be „lost” to bread and holidays – unless we learn something in those holidays which make us win the million question of "Who wants to be a millionaire?". Then the holiday becomes an energy converter between your effort at the job, and money.

Well – and here is one point where I wanted to get you – health and thoughts are also forms of energy... About the converter between them sometime later.