Home > Everything Is Energy > Thoughts and Emotions Are Energy Too!

Forms of Energy: Thoughts and Emotions Are Energy Too!

We said here, first, that everything around is some form of energy, then we mentioned the scientific definition of Energy as a measure of the capacity of an object to do work, and then gave also an "intuitive" definition of it, namely that

We do also feel and know it, that any physical entity needs energy to move and interact. According to these definitions, do you believe thoughts and emotions are energy, too?

Tempted to say "no", maybe, aren´t you. Just sit down and think a bit (or don’t sit but do think:) What motivates us? If we dig deep into our souls we see that at the core of each and every of our deeds there is one of these two things: a thought or an emotion. Thinking that we’ll succeed, or loving dearly somebody, makes us move and do work for that.

Thoughts and emotions make us move and, yes, do the whole work of living.

Let me show you something about how thoughts ARE energy because they make something move. Not inside the thinker, but they do make move. Thoughts ARE emotions because (unfortunately) they can be monitored. I say “unfortunately” because I am thinking of all the military applications this fact is sure to get. They throw us sand in the eyes with the medical uses or with the daily convenience. But be sure it is NOT for opening the car with busy hands by mere thought, as they show us in this video, that they strive to make things be moved by thoughts.

This video shows after second 125 how a humanoid robot can be made to move its right hand by the mere thought of a person thinking about the robot doing so. For me, thinking how this success of technology can develop further, it’s frightening. There is somebody out there who can dig into and decipher our thoughts. Personally I have no problems if this somebody belongs to my family or is a friend. But I doubt the benevolence and purity of aims of people researching this. 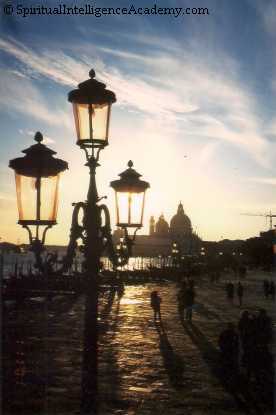 (While looking for a photo suiting the topic I´ve stumble upon this one and for some reason I said "That´s it". I don´t know why, even if I have considered other pictures as well, I stuck with this first one.

Maybe I´ve unconsciously made some connections, like "It´s Venice". This photo is Venice indeed, which means for me an embodiment of feelings. Then it alludes the perpetual motion of water, then the energy of sun... Our unconscious is deep indeed.)

Here it could be touched here also natural telekinesis phenomena like Nina Kulaghina and Uri Geller, but besides the robot above I only want to mention a headset. There is a headset on the market (I tell you the name only if you contact me personally) being used for making computer games characters to move according to user’s face mimics, emotions and thoughts… Buuu. I wonder how long does it take until they can influence our thoughts to elect who they want us to, or to buy a product we don´t need. (Aren´t they do it anyway already?)

I would have liked to talk about them without also promoting these products. Any energy I give them gives more energy to a research I can’t agree with. But on the other hand I do want you to see it’s true: thoughts and emotions are energy too because they interact with the world. They produce a change in it. They make things move.

Thoughts and emotions are forms of energy too. Hence, in appropriate conditions, they can interact with any other form of energy.

Matter is another form of energy...

And in an article in the near future I’ll tell you about some scientific experiments proving how thoughts and emotions do move other objects around and produce changes in the world outside.