Everything Is Nothing but Merely Energy - What Is Energy?

Part 1: Matter Is Energy and Energy Is Matter


Energy describes the capacity of an object to do work. It is a potential which yields changes.

What is energy?! And I don´t mean here necessarily the one we pay bills for.

Let´s first give it an intuitive definition to be sure we talk about the same thing. Energy is a measure of just how much something can move and exert an influence upon its surroundings. That implies: the more energy, the greater the influence.

There are several forms of energy to be discussed in this series of articles, and at least one of them will surprise you. 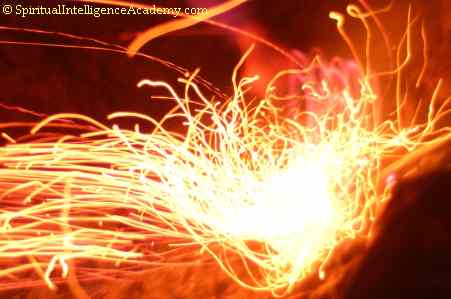 Everything is nothing, say the Oriental philosophers.

Everything is energy, says Saint Einstein.

Please, do survive this article. It is not as badly Physics as you might think seing I start with Einstein. (My 7th grade pupils did understand it.) And if you can at least accept he might be right :), this idea lays the very ground premise for this whole site:

Everything around is energy, and only energy.

(If, reading, you feel it´s too much, just jump to the Conclusions :) below and see whether it is worth to keep it up with reading.)

This is what the five famous signs, E = mc² , mean and how they are to be read by non-Physicists: E stays for energy, m for mass, c is the speed of light, and the equal means there is a relation of equivalence between them.

The idea is crucial and has implications hard to see at first sight. When we think that everything around us is some form of energy, we tend to think (and wonder) that this applies also to matter. Sure it does! Physicists finally do agree (for quite some time): matter IS a form of energy.

Yes, matter. Don´t stall at the illusory idea it is solid. It only seems so. The most famous way to explain this illusion is to recall how a propeller does look like a discus when spinning, even if actually it´s more empty than full. (To touch ordinary matter is not as dangerous as touching a spinning propeller, but you got the idea!)

If you still can´t accept it, go to this little video showing that electrons are both wave (i.e. energy) and matter and then try to come back for some logical arguments I used with my 14 years old students.

If you want arguments for matter being a form of energy, think about the photons, the particles light is made up of. You might believe, being light, photons are pure energy. That is, they have no mass. (Why is mass important? Mass is THE characteristic of matter which makes it be "matter" in the first place.) That means, light is no pure energy either. Photons do have a mass. Light beams do bend passing by a heavy planet or a black hole. Light beams are attracted by their huge masses, because they themselves also do have a mass! No matter how teeny-weeny it might be: light does have mass! 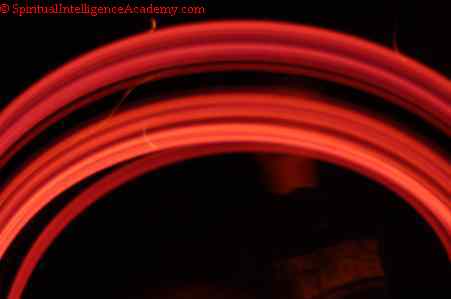 More exactly, while being aware that matter is also a form of energy, physicists agreed that photons (making up the "pure" energy which is the light) are actually both what we call in our everyday life "energy" and "matter".

Further on I´ll show you that matter is also not pure "matter" either. That a part of it can convert into energy. This is tremendously important, you´ll see soon why.

On the other end of this continuum of energy from light to matter we have the particles. They are tiny parts of matter. The most interesting here and now are called protons and one may meet them in the nucleus of the atom. ("Meet" is to a great extent exaggerated.) Well, protons are all electrically charged, namely positively. Have you thought...

... Why in the world these protons do stay glued together in that nucleus, in spite of being all positive, while Physics says that they should repel each other?

The answer pops up if we first calculate and then actually measure the protons´ mass. If we simply add the theoretical mass of all the particles in a nucleus of an atom we call Thomas, we get a number, say, 10. That means, the nucleus of Thomas´ nucleus should have this weight of 10. We get however in trouble of we actually put this nucleus on a scale. The scale will show a lesser weight, say, 9,7. NOT 10.

Where is the missing mass, where does this difference come from?!

The difference comes from the theory. We have just proved it! We have demonstrated that a part of the actual mass of the protons was converted into energy. It´s exactly THE energy needed to "glue" together in the nucleus those electrically identically charged protons, and prevent them from running away from each other.

Why in the world is it important that mass can be converted into energy?

It is important because it gives you an example for that E = mc² , that it, for the idea that "mass", i.e. matter, can be converted into energy. That not only photons are also matter, but that matter is also energy, too.

Please, do notice that E = mc² doesn´t say anything about the conditions when this conversion could happen. It just creates the theoretical frames allowing energy and mass to be transformed into each other. IF theory didn´t allow that, it would not be possible no matter how hard we tried it!

Again, WHY is it this conversion from mass to energy and back that important?

As shown here, it is one of the physical properties of energy that its various forms can be converted from one into the other.

On the other hand, as shown here, thoughts and emotions are also forms of energy. (This is what I thought it might surprise you. This article mentioned above brings some evidence for this, and will be continued by another one about some scientific experiments in the same direction.)

Did you get my point? Let me sum up the conclusion of this article:

And here we open the door to different esoteric fields like telekinetic or creating objects out of nothing, or to that Ask and it is given from the religion. (It is a long way to them, however. Here is merely the foundation.) Moreover:

What are life situations made of? Life situations imply people and some forms of matter (like money or other objects). But People = bodies (i.e. matter) + thoughts (like values and principles, or like wanting something) + emotions (like love).

Bodies and thoughts and emotions and objects are all forms of energy!

Again: please DO note the box above: they can convert and interfere with into each other in appropriate conditions. That means, we have the theory allowing that conversion. HOW is that made is another thing. We discuss it here (article to be written a.s.a.p.)!