The Soft Belly Fat of the Flabby Bellies

(If you have already read the other articles about fat, you may skip the introductory part. It merely makes this article self-sufficient.)

Why on Earth can’t I get slim anymore, in spite of keeping this diet?

As I said
here: having accumulated recently a stubborn fat which won’t go away made me ask myself more seriously some body fat related questions.

Overview of the FAT questions (in the Soft and Hard Belly Fat category):

(If you are not familiar with the differences between the hard and the soft belly fat, here their short introduction: )

Upon research I found out that the hard belly fat is actually fat accumulating under the abdominal muscles, i.e. beyond the muscles at the surface of our bellies, e.g. around internal organs. It is also known as visceral fat or omental fat. And the soft belly fat is caused by "soft” fat, accumulating subcutaneously, that is between your (our!) skin and the abdominal wall / muscles. It makes rings, and we can grasp it between the fingers. The hard belly fat cannot be grasped this way, since the abdomen is really hard.

The hard belly fat is hence deeper than the soft belly fat. It is also the one causing the most problems with health - heart, circulation, cholesterol and so on.


Mine Is a Soft Belly Fat. Help!

I was interested in the real, spiritual causes of my soft belly fat. Based on the idea that anything existing has at its core an idea (a „word” as the Bible puts it), i.e. a basic information, I wanted to know which is the information that prevented me to get rid of these extra (in my case about 10) kilos, or that „helped” my body calling back the painstakingly lost (few) kilos after finishing the diet. 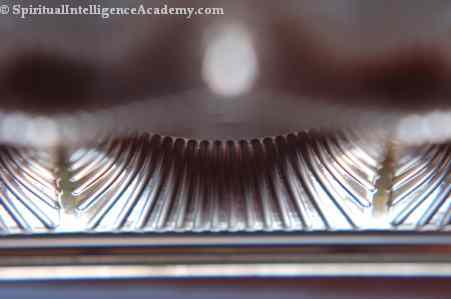 And I found my answers. But you shouldn’t read further unless you can at least consider the idea that people proposing for the Nobel prize Dr. Candace Pert for her research, might have good reason in doing so. Her research described in the book Molecules of Emotions, about which she speaks here and I´ll also write soon, proved that there is a permanent chemical connection between emotions and body.

This research is so tremendously important that actually it should have won a few Nobel prizes in a row to equal in grandeur its implications and consequences for all the human race. (An article about what would have happened if she did win the Nobel, will follow.) This research offers a clue for the hidden mechanism behind the ancient science of chakras.

Chakras are formations of a non-physical nature making the connection between our physical body and our thoughts and emotions.

A first clue of the answers dawned upon me by reading an intuitive explanation: we feel weak in certain areas of our lives, and then the appropriate chakras feeling week get a "shield" of fat. If it is the first chakra (the one making the connection with our environment like family, other people or the physical surroundings), then what gets first fat are our hips and bottom. The very area around our first chakra.

If we have problems with the third chakra, the one governing our personal power, what gets fat is our belly. Either with soft fat or with hard fat.

What makes our body decide when to accumulate the one type of fat or the other one?!

Here comes our way of thinking in action. The thoughts and emotions related to the hard belly fat are discussed here. That "beer-belly" fat is caused by a hardness in us: [wanting] an excess of power. Or being unable to (apparently) lose power.

Feelings, Emotions and Behavior Related to Our Flabby Bellies and to Soft Belly Fat

The soft belly fat is caused in turn by an excess of softness: the inability or insufficiency in exerting the personal power. Situations like

The list is not exhaustive, but you've got the idea. If one of the emotions above (or other similar but not listed) is one of your concerns, it's only a matter of time until you get a flabby belly. I.e., until the energy of this kind of feelings builds the matrix which will "attract" the soft fat like a magnet. Maybe , you own it already. This matrix won't let go this fat, unless you give up the emotions.

Because, yes, it takes some time until the energy of one power-less thought adds to the energy of another similar weak thought. When a certain level of such negative information (hence energy) is achieved, the matrix awaiting to be filled with matter (in this case, with soft belly fat) is already there. Thought after thought, emotion after emotion makes the accumulating energy denser and denser, until it becomes so dense that it appears as matter. (S. this article about Matter is energy, too)

Why is this possible is briefly explained below, in the Law of Life no. 1 (and will be discussed at large in another article).

And since fear is a significant concern for both women and men, but still rather women, we´ll find this soft fat rather among women. But not only.

The necessity that a behavior reaches a certain level is also why it takes a while before you remove this flabby belly. It happens when you become the real Master of your body, thus making your soul and not your body be the captain. The advantage is that, having removed the real cause of being fat, there is no more yo-yo effect!

Taking a self-disciplined way of life for example helps in many cases to achieve the noble cause of you and not your body becoming the captain of yourself. But don't expect losing one pound after each meal when you manage not to fill your stomach to the brim, or after each day when you could stop eating between meals, or when you could prevail over your body asking for more chocolate!

If you decide this harder but sure way to get rid of your soft fat, be aware that the first 40 days are crucial. Any habit preserved for 40 days, after that becomes easier to keep and is lasting more. (Why, I'll explain later.)

Everything in order to exist is built upon a basic information. Information is the heart of anything.

Strong enough information gets a clothing of energy. Enough appropriate energy is clad in matter. It is as if an energy matrix is filled with matter. Very much like building a house: we first get the idea, than the plans (these are the information), we start putting our efforts and money into it (that is energy, money is energy too, look here!) and eventually on this information we put some matter. And there you are, our new house!


The thoughts, emotions and behavior related to our soft belly fat are connected with a lack of personal power, or fear to exert it, as listed above.